Changing Gear: Alignment of major auto manufacturers with the goals of the Paris Agreement

No single production plan of 14 leading auto companies is fully aligned with the goals of the Paris Agreement, according to analysis from 2° Investing Initiative (2DII), published in a joint report with Institutional Investors Group on Climate Change (IIGCC). 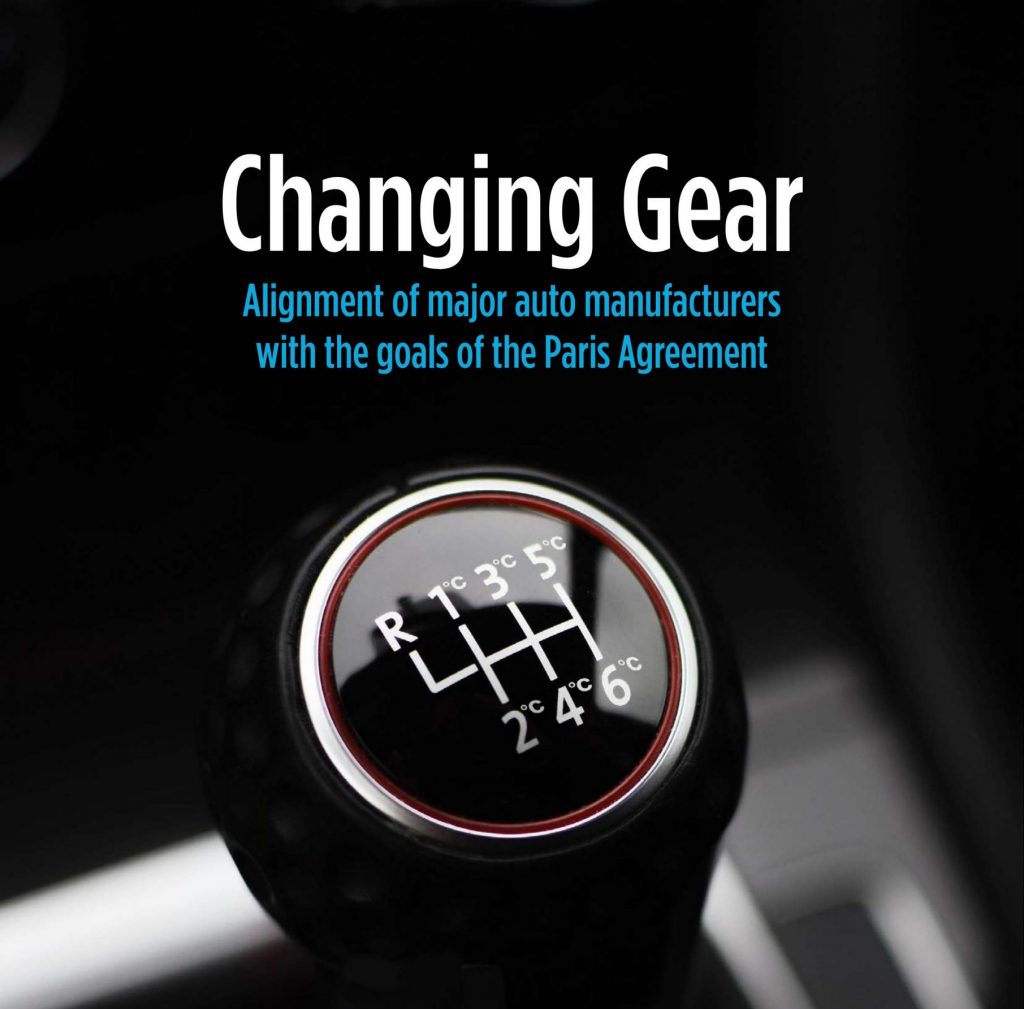 No single production plan of 14 leading auto companies is fully aligned with the goals of the Paris Agreement, according to analysis from 2° Investing Initiative (2DII), published in a joint report with Institutional Investors Group on Climate Change (IIGCC).

The report, Changing Gear: Alignment of major auto manufacturers with the goals of the Paris Agreement, assesses the production plans for the 14 biggest global car companies by emissions – covering electric (EV), hybrid and internal combustion engine vehicles. Its findings, based on modelling of vehicle emissions and climate scenarios from the International Energy Agency (IEA), show none are aligned with climate scenarios consistent with limiting warming to below 2°C, let alone well-below 2°C, as goals of the Paris Agreement.

Daimler and Geely are the only two manufacturers ensuring at least a portion of their overall vehicle production plans (in this instance for EVs), are partially aligned with a scenario in which the increase in average global temperature is ‘significantly below 2°C’ (B2DS scenario). Three others – Ford, Peugeot and Volkswagen – meet a ‘below 2°C’ scenario (2DS scenario), for EVs and Geely for internal combustion engines.

If all of the auto manufacturers assessed were to align their production plans through to 2024 with a B2DS scenario, then the companies would produce 43 million fewer internal combustion engine vehicles and would emit 1.5 billion fewer tonnes of CO2 over their lifetime. Equivalent to the combined annual CO2 emissions of Canada and Mexico, this reflects both the scale of the opportunity and the impact of the sector on the climate.

The analysis also demonstrates that, for the five-year timeframe assessed (2019–2024), manufacturers are on course to underproduce both electric (by 8.7 million) and hybrid (by 20 million) vehicles.

Publication of the report comes as first-mover companies, such as Volkswagen and Daimler, are making commitments to achieve net zero emissions. The aspiration is welcome, and all firms across the sector will ultimately need to work to net zero business strategies. However, the report findings highlight that production planning still requires significant change in coming years.

Findings from the report will be used to help inform investor engagement with companies across the sector. This includes an emphasis on ensuring that net zero business strategies are not only being put in place, but that commitments are also tied to short- and medium-term production planning targets across all vehicle types.

This report has received funding from Bloomberg Philanthropies and from the European Union’s Life NGO program under Grant No LIFE18/NGO/SGA/FR/200020. The report reflects only the authors’ views, and the funders are not responsible for any use that may be made of the information it contains.