Every month I learned what staff thought about my performance…and it was a brilliant experience.

The beginning of the pandemic was one of the most overwhelming experiences for everyone, with new hurdles and issues arising almost daily – not only for all of our staff members, but also for me as an Executive. When should home office start? How should it be managed? What support did staff need? What were we going to lose in productivity and morale? A lot of questions, very few answers. Many choices, many mistakes. But there was one policy that made all the difference.

If I wasn’t going to be able to physically meet or see anyone, I at least wanted to have a ‘pulse’, a sense of where things were going.  We ran the first survey in May 2020 and it was not great. By June, a solid half of staff had a job satisfaction of 5 (out of 10) or less. The pandemic pinch was starting to make itself felt, but obviously the organization was also going through broader disruption. Numbers improved over time, but not consistently. Between August of last year and February of this year, satisfaction with my performance dropped by almost 25%. Seeing the monthly survey results last winter did not make for easy reading. 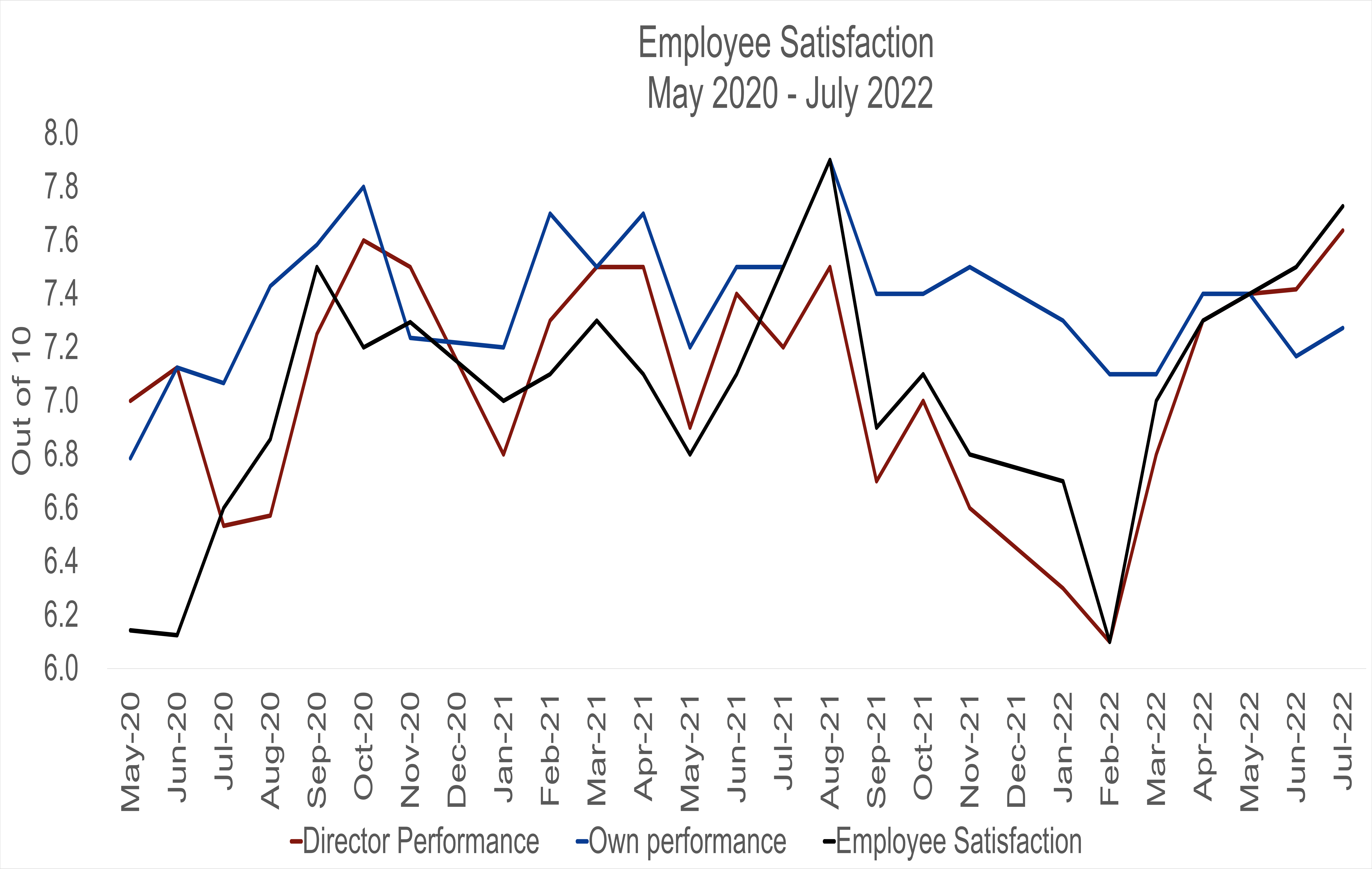 But they also became one of the most effective ways to understand when we were going wrong. To create accountability. And a basis for dialogue about how things could be improved, what I could do, what the team could do. Today, I couldn’t imagine what it would be like leading a team without such a monthly check-in. As anonymous surveys go, they can never replace the interface of discussing issues one-on-one or in groups. They also cannot replace proper annual reviews. But they are an integral part of making employee satisfaction not just an abstract goal, but a performance indicator.

Today, satisfaction is back up to last August levels at 7.6 out of 10. I don’t suggest satisfaction should be the only goal of an Executive. Sometimes, making hard choices comes at the expense of short-term staff welfare, but (hopefully) long-term organizational (and staff) benefit. Running an organization should not devolve into a popularity contest. But especially for a non-profit think tank facing the challenges of recruiting and retaining talent in a competitive environment, and the pressures of “sacrificing” for the mission that many NGOs in my experience suffer from, staff welfare is more often than not a solid North Star for whether the organization as a whole is going in the right direction.

Since the start of the pandemic, 2DII Germany has seen many changes. Last year, we have transformed into an employee-governed membership association where staff members elect the Board of Directors and hopefully create both true ownership and accountability. From October, 2DII Germany will have the privilege of Dr. Lea Siering joining as our new CEO and I am look forward to working with her on the next steps of our journey to fight climate change. The next months will also see a broader revamp of our programme, following the transfer of stewardship of PACTA to RMI.

I am genuinely excited about these changes, nervous, yes, but also excited. In all this, it has been a privilege serving a brilliant team. The last two years have been hard. Many choices, many mistakes. But I am so grateful I had a team that reminded me that up is up and down is down throughout.