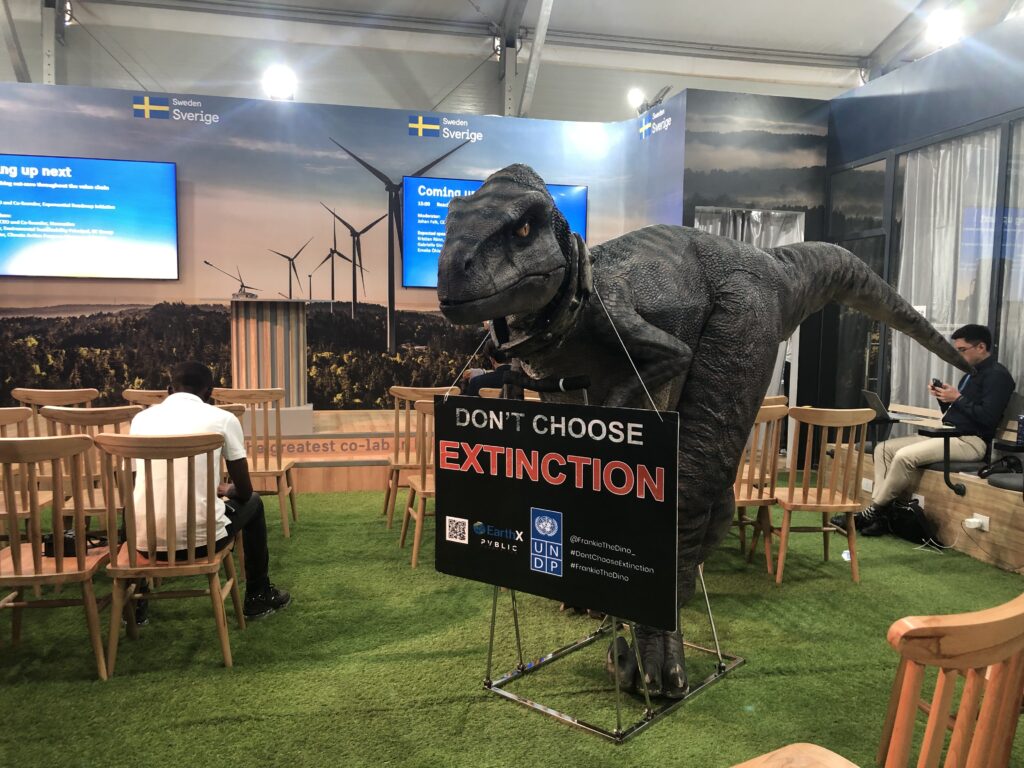 While the global economic outlook for 2023 is not very encouraging and the multiform crises persist, particularly on the urgent issue of climate change, what can we learn from the various discussions held at COP 27 - discussions that have been continuing until recently in Montreal on the issue of biodiversity? I propose to come back and look at what emerged to have a better understanding of the stakes, the roles and implications of the parties involved, and, above all, the course we must follow to see the long-awaited changes.

“I hope that the cooperation between experts in the subject will make it possible to conclude the COP 28 with ambitious and concrete agreements.”

If the staging of a dinosaur denouncing the 6th mass extinction was a vibrant reminder of the link between climate negotiations and biodiversity, we at 2°Investing Initiative (2DII) were even more struck by the badges that some delegates proudly displayed, leaving their interlocutors speechless when they could spot the message “WTF? This is not a breach of the (strict) rules of procedure governing United Nations events, as it stands for “Where’s the Finance? And if many have remembered this anecdote, it’s certainly because it’s not!

The role of the financial system was once again central to the negotiations, which were echoed in the many conferences held on the sidelines of the official discussions. Wednesday, November 9, declared Finance Day in the official agenda, made a strong impression through the various announced initiatives (nothing unusual compared to other years), but above all through the expectations of all economic sectors and States for a radical and profound change in financial practices. Declarations without effect have no place anymore, greenwashing is no longer tolerated (especially by the youngest, who are becoming increasingly vocal on the subject), and financial institutions, both public and private, must transform commitments into action, notably by moving from alignment to impact. These few lines can summarize the main messages of the event that 2DII co-organized with Finance for Tomorrow at the French Pavilion.

More generally, what we took away from this week, full of exchanges and meetings, can be summarized under the acronym “AAA”. This has nothing to do with the standards of organisations sometimes qualified of failing concerning food and various commodities, our triple A describes an African COP, focused on Adaptation and asking for the passage to Action.

A COP in Africa, for Africa… but not only!

Egypt put Africa at the centre of attention. The African pavilion, located right next to that of the host country, was packed at every event. And it was more generally the developing countries that drew attention to their specific problems for the first time. The financing of the “loss and damage” mechanism was a major focus of media attention. However, it should not detract from the reflections on the link between financial debt and climate debt in these countries, which are also being penalised by the consequences of climate change and the financial burden of sovereign and private debt. In addition to this situation, there are already known challenges: social, health, and education problems. This is fully in line with the research recently launched by 2DII on the debt for adaptation mechanism.

For a long time at the centre of the negotiations, the financing of global warming mitigation shared the spotlight this year with the financing of adaptation to the consequences of climate change. Many sessions at this year’s conference highlighted the delays in financing adaptation, particularly in the poorest countries. At 2DII, we are convinced that financial actors as a whole, and development banks, in particular, must be able to increase financing for the entire chain from mitigation to resilience. Adaptation is a central line of research for 2DII in the coming years, particularly about a better measurement of physical risk, but also through work on the role of insurance companies in this area. There is nothing to oppose in principle the reflections on mitigation, adaptation, and resilience, they are complementary themes that deserve equal attention.

“From billions to trillions”, a call-to-action 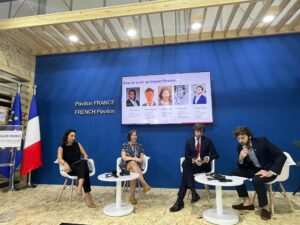 2DII’s side-event in partnership with Finance For Tomorrow.

The Blue Zone in Sharm El Sheikh echoed with a call to action (“walk the talk”) from multiple delegations. Turning commitments into action are becoming more and more urgent as extreme events multiply in a much shorter time frame than expected. For the financial sector, this means in concrete terms that there must be a profound change in all players (public investors, financial institutions, and individual savers), in all activities (banking, insurance, and financial markets) in a systematic way, i.e. by massifying the offer instead of creating niche markets. The financial stability, the responsibility of financial institutions, and the financing of a just and orderly transition must serve as a compass for the different stakeholders and will be at the heart of 2DII’s research work in the coming years.

It is often said that our minds act as a distorting prism, leading us to believe that the issues we know best are also the most important. However, this COP leaves me with the feeling that, in the case of responsible finance, it is not a simple belief and I hope, at the end of this year, that the cooperation between experts in the subject will make it possible to conclude the COP 28 with ambitious and concrete agreements. Every degree counts, every COP counts.